An Overview of Digital Advertising in the Middle East [Infographic]

According to eMarketer report in April 2017, paid media advertising outlays worldwide will increase 7.3% in 2017 to $583.91 billion. Growth will be roughly on par with previous estimates, and spending will rise steadily throughout the forecast period, driven by increased investments in the e-commerce industry and mobile ads. Digital will remain as the fastest growing medium with 14% in 2017.

Market size: Worldwide digital ad spending will reach over $205 billion in 2017 and represent 38.3% of total paid media. The numbers are expected to see double-digit growth at least 2020, eMarketer estimates. Mobile ad spending will reach around 63.3% of digital and 24.3% of total media ad spending. Developed economies are expected to show a slowdown in investments in this sector in 2017. Counterwise, ad spend in the APAC market, followed by Latin America are showing a high growth in revenue. In the recent years, experts have predicted that the Middle East and North Africa will show a strong growth in digital advertising. Is that true? We will be looking closely at the top trends in the region to better understand the market share and growth rates.

Advertising Spending in The MENA region: According to Statista, a year-on-year timeline presents the total advertising spending in the Middle East and Africa. In 2017, the region is expected to account for 4.1 percent of the global ad spend. Ad expenditure in the Middle East and Africa would amount to 24.25 billion U.S. dollars in 2017, up from 23.1 billion a year earlier, which would constitute a  growth rate of 5%. Growing or decreasing in 2017: However, a recent global ad spending forecast from Zenith had another opinion. According to the source, The MENA (The Middle East and North Africa) will be suffering from the low oil prices. The region forecast expected a decline in ad spend (-9%) in ad spend between 2016 and 2017.

Digital Ad spending in the Middle East and Africa

*Since there are major differences in the numbers, I believe that the numbers could exceed both if we consider that there are big segments of individuals and small businesses are directly financing Facebook Ads. I have been also working with direct Ad placements on local portals and forums specialized in financial and stocks market. The size of this market is big in the GCC but relevantly unclear when it comes to global statistics. 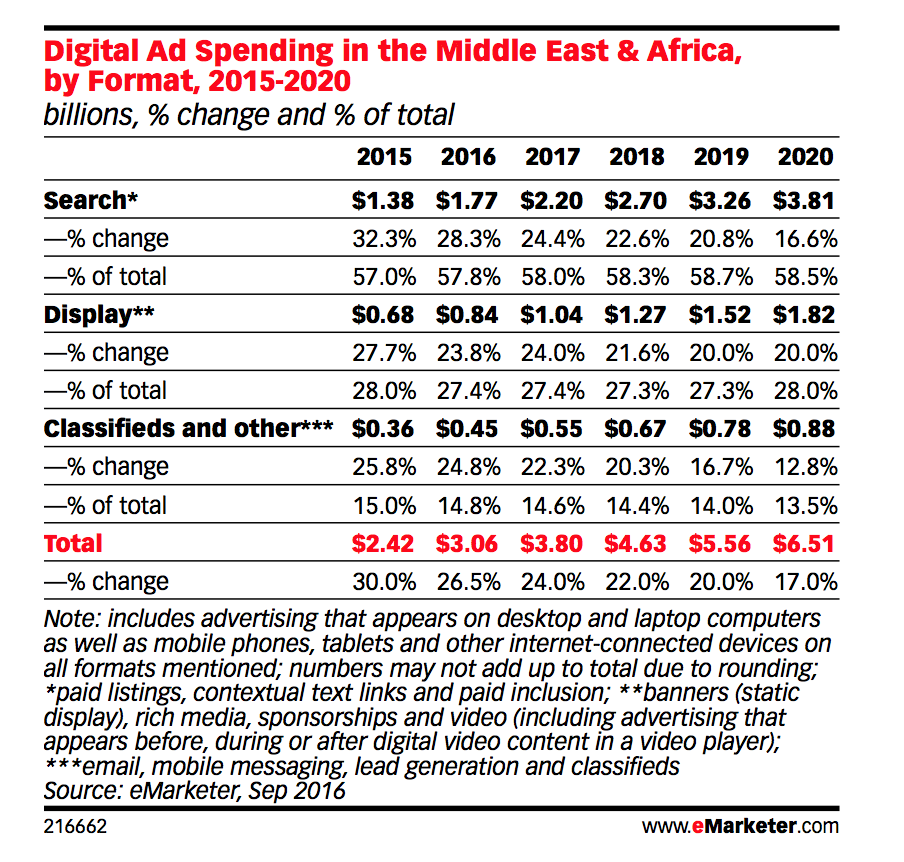 Search advertising comes on top of the list with over 58% of total spending in the region. Google remains the top player in the Middle East and Africa with the huge demand on YoutTube advertising in 2017. According to agencies, YouTube Ads is generating a great increase in digital budgets which is used to be allocated to TV advertising. KSA is leading the region in the numbers of YouTube reach.

According to mideastmedia.org, The region has more than 500 digital agencies offering a range of services in the digital marketing, most of which employ less than 15 people. Governments, consumer brands, telecommunication operators, and real estate respectively, are the largest buyers of advertising in MENA.

Egypt and the UAE are the most important economic bases for digital agencies and employees. Thanks to the increasing numbers of digital startups, Egypt represents more than half of the advertising agencies and employees in the region, due to its creative talents in content production, translation resources, low salaries, and its main role as a local content creation hub. The UAE represents 30 percent of advertising companies and employees, which benefit from its economic stability and regional headquarters. Majority of the top agencies in UAE are international media and digital firms based in Dubai.

The region is still lacking behind when it comes to the use of advertising and marketing technologies including machine learning advertising such as Google DoubleClick as well as advanced analytic platforms such as GA 360, Adobe Marketing Cloud and attribution models.

Let’s take a look at the advertising spend in several of the Middle Eastern countries.

Let’s wait until the end of the year to have the final numbers and keep evaluating the industry.

Do you have any experience in digital advertising in any of the Middle East and Africa region? What opportunities do you see lying in this sector?